Indie fashion designer, Ebony White, is featured on Rihanna’s new series, “Styled to Rock,” on Bravo. This series is a fashion competition including mentors to help guide the competing designers through the competition process.  They include pop singers, Rihanna and Pharrell Williams.  Also part of the mentoring  team are model, Erin Wasson, as well as, Mel Ottenburg.   Ebony was hand-picked by the influential superstar herself, Rihanna, and has the chance of a lifetime. The contestants have the opportunity to design for a different celebrity in each episode.  The winner of the competition will be featured in Glamour Magazine, have the opportunity to work with Rihanna’s design team, in addition to winning $100,000 for all their hard work!!!!

Ebony has 15 years of experience in the fashion industry.  She has worked for brands as diverse as DKNY, Victoria’s Secret, Calvin Klein, Levi’s, Catherine Malandrino, Emanuel Ungaro, and Juicy Couture.  Her designs have been featured in numerous publications both online and off, from Elle Magazine to Style.com and have been worn by celebrities and sold in stores internationally.

Designer, Ebony White, shares deets from Rihanna’s show and why she ROCKS!

You have been a ghost designer for several household labels; how does it feel now that you are pursuing a career in your own right?
I’ve been pursuing this career my Whole.  Entire.  Life.  I’ve been a professional designer for 15 years. The difference is that now people might have the chance to put my name and face to my work. The idea of getting credit after so many years of blood, sweat and tears; it’s what I’ve worked very hard for.

What brand did you most enjoy designing for?
I think my favorite experience was designing swimwear for Juicy Couture.  I love swimwear and the Juicy Couture line was super feminine, luxe, frilly and fun.  It was very close to my own style; and they were trying to do something fresh and new.  I liked the image of the woman they designed for: strong, feminine, free-spirited, edgy and fun.  I was quite proud; also, because of me, they incorporated into their collection what we called, the “flirt” bottom.

Has anyone in the entertainment industry influenced your collection?
This particular collection was inspired by my first design on “Styled to Rock.”  My inspiration for that garment was Lady Gaga.  I was so frustrated with how the look appeared on the show, that it was the first thing I worked on when I got home.  That same outfit is now featured in the video on the main page of my website.  On the show, I chose Lady Gaga as my muse because she represents boldness, fearlessness and freedom to the 10th power; and I love her for that.  So, in a sense, that energy from Lady Gaga influenced this entire collection.

What secrets or surprises can you spill about your experience being on “Styled to Rock?”
People compare “Styled to Rock” to “Project Runway” but this show is definitely filled with its own unique set of surprises.  Take last week’s episode, for example.  In only the second show both Adriana AND Jordan were eliminated at the same time. But that’s not all!  With no warning, they bring in 2 new designers!  Trust me, the madness doesn’t end there.  The only thing I can say is you have to watch!

It must have been difficult competing against the other designers on the show. Can you explain the atmosphere behind the scenes during the competition?
Well, they don’t air all that goes on behind the scenes; which was kind of a disappointment for me, since we really did have a lot of fun. Although it was a competition, I think for the duration of the show, we all kind of felt like we were in the same boat.  With each elimination, we were one step closer to our goal. That was good but, we were sad to see the others go. We also knew, it could be one of us the next time.

Who was your favorite mentor?
All the judges brought something valuable to the table in their own right.  If I had to pick a favorite, I’d say mine was Pharrell.  For completely inappropriate reasons.  No, I’m joking.  Sort of.  He’s certainly a cool, very suave, handsome man, BUT, I could also see he’s very smart, caring, passionate, a perfectionist and not afraid to speak his mind.  All of these are qualities that I admire and respect.  Especially the smart part. 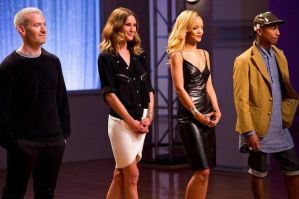 You seem to be extremely passionate about empowering women. Where does that come from?
Honestly, I think I’m most passionate about empowering the underdog.  You are your own worst enemy when you don’t believe in yourself, and I hate to see other people go through that because I know what it feels like. I was raised in a family filled with courageous women.  I have the best mom in the world.  She is smart, compassionate, committed and caring, and I grew up with sisters who are both beautiful women inside and out.  I am very blessed.  I guess it’s innate in me.